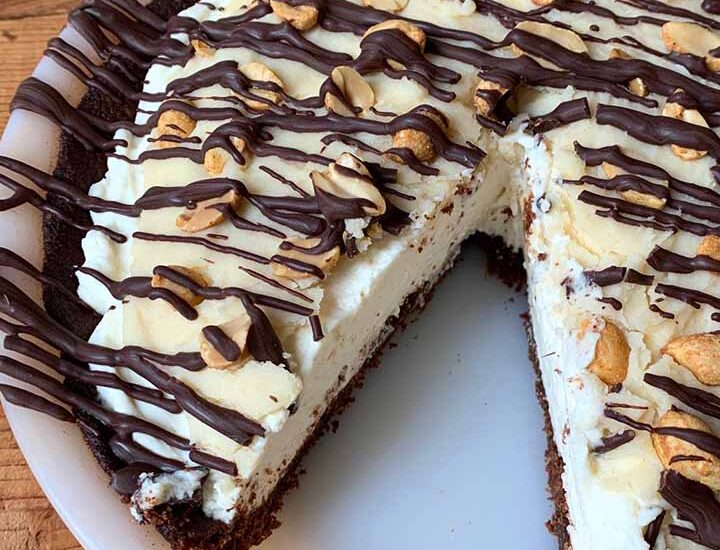 This low carb and Keto recipe is for a decadent chocolatey Snickers pie with only 4g net carbs per slice. It’s a sugar-free dessert that you would never guess is sugar-free.

2.  Place almond flour, sweetener and cocoa powder in a food processor or blender.  Pulse to blend. Add the vanilla extract and butter and blend until the mixture comes together to form a dough. Transfer the dough to the pie pan and press the dough evenly into the bottom and sides of the pan.  Use a fork to add holes in the crust for the steam to escape.

4.  As the crust is cooling, make up the caramel sauce.  Add the butter for the caramel sauce to small sauce pan.  Cook over medium heat until golden and just boiling.  Add sweetener to the pan, turn heat down to low and simmer for 1 minute.  Add vanilla extract and heavy whipping cream and stir well.  Set aside to cool and thicken, about 1 hour.  If it separates, just mix it until combined again.

5.  Add filling cream cheese, vanilla extract and sweetener to a large bowl and whip with an electric mixer until light and fluffy.  Add in cream and whip until hard peaks form.  Store in the refrigerator until ready to use.

6.  Fill the cooled crust with the filling mixture.

7.  Microwave chocolate chips, sweetener and coconut oil in 30 second increments until melted and combined, about 90 seconds.  Allow to cool for a few minutes.

9.  Refrigerate until serving, and store leftovers in the refrigerator or freezer.