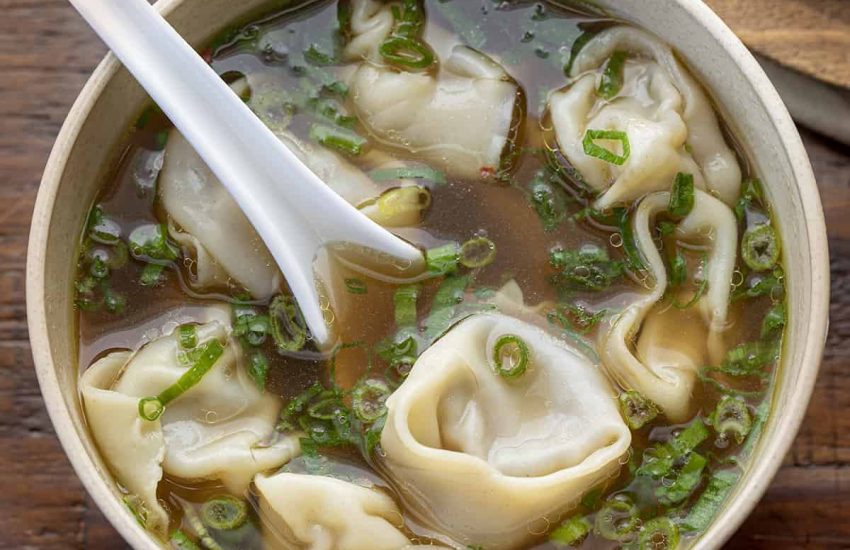 1. Wonton Wrappers – You can find Wonton Wrappers in the refrigerator section of Woolworths and Coles in Australia in the section where fresh noodles are sold (usually next to the pasta). You will need 2 packets (there are 40 in each pack). Or otherwise reduce the filling slightly and just make 1 packet.

4. Sesame Oil – This sounds like a lot, but trust me, it tastes incredible! Use toasted (brown oil) for better flavour, not untested (yellow).

6. Smash garlic cloves by pressing the side of the knife down on the side so they burst open but mostly stay whole. It allows the flavour to infuse into the soup while making it easy to pick out of the broth before serving so you have a clean broth without bits of garlic in it.

8. I use these Asian egg noodles from Woolworths in Australia. Any dried or fresh egg noodles will work fine.

9. When I’m feeling really lazy, I cook the wontons in the soup broth. Just be aware that it will suck up some of the broth so add 1/2 cup of water.

10. The filling for the wontons are from this Wonton Soup recipe by Omnivore’s Cookbook, a fantastic authentic Chinese food blog. It is better than my mother’s!!

11. IMPORTANT: Do not freeze if you make this with prawn meat that was frozen – you should not refreeze raw seafood. Use all pork. Or if you really have to have prawns in your wontons, cook them very lightly in a skillet until they are JUST cooked (still opaque, not solid white), then chop them finely with a knife (i.e. almost mince them). Mash up the pork per recipe, then at the end just stir the prawns in – scrape any juices on cutting board in as well.

12. Nutrition per serving, with bok choy, no noodles. If you add egg noodles, it increases to 347 calories per serving. Make it even healthier by adding more vegetables – just blanch them in the soup broth.